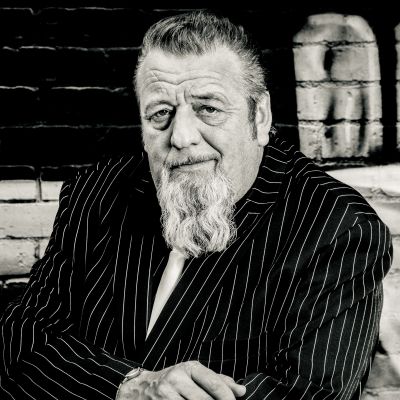 Sign InSign Up
About
Harpdog Brown Burns The House Down Every where he goes, he creates a 9 alarm fire, leaving nothing but embers behind, with a warm glow in the hearts of his followers!
Harpdog Brown has grown a solid reputation as a real-deal purveyor of classic electric blues. Think of the old Chess Records and Sun Records of the late ’40s and early ‘50s. These days he’s been touring with a new show called Harpdog Brown & the Uptown Blues Band - a vintage New Orleans Blues sound that’s piano driven and features some incredible horn playing. Any show might feature slide trombone, trumpet, clarinet and often a sax and clarinet. Still a vintage vibe, just a different vintage! This music will move you! They perform mostly originals yet they often include great songs of the masters from that era. Think Louis Jordan, Satchmo, Sonny Boy Williamson, Wynonie Harris, even Duke Ellington. Audiences are raving about this new show! He’s been called a Blues Evangelist, and that’s a very fitting moniker. "I speak the blues like it's the truth, and it is”, he was recently quoted. "I do feel like I'm a servant of the people. A missionary if you will. Music can heal people if they pay attention to the messages in these songs.” He delivers those messages using the vintage sound whether it be with his lowdown classic blues band the Travelin’ Blues Show or with his Uptown Blues Band. Harpdog says "Blues has a healing power. It's a beautiful celebration of our perfectly flawed lives. We help people forget about their issues of the moment and then they realize that we all have our issues, and that's OK." Vancouver-based Harpdog Brown is a gifted vocalist and an imaginative harmonica player born in Edmonton in 1962. An adopted child, he has felt somewhat detached his whole life - "a lifelong battle of not feeling like I belonged. I feel like I was born for the circus, you know, born to travel. The blues tapped me on the shoulder years ago and said 'this is where you belong, son'. So the blues became my circus and there's no better way to travel than with a band!” Over the years Harpdog, yes that is his real name as his passport will attest, has issued 7 CD’s to critical acclaim. Back in 1995 his Home is Where The Harp Is won the coveted Muddy Award for the Best North West Blues Release, from the Cascade Blues Association in Portland. He is still the only Canadian to do so. A Juno Nomination for the best Blues Release in Canada followed that same year. Teamed up with Graham Guest on piano, his CD Naturally was voted #1 Canadian Blues Album of 2011 by The Blind Lemon Survey. He’s also received three nominations for Blues Artist of the Year by the Western Canadian Music Awards. These are outstanding accomplishments that clearly solidify his rise in popularity and a new beginning in his career. The album that delivered his first Maple Blues Award, titled What It Is, maintained status in the blues and roots charts throughout the year and in fact was ranked #20 worldwide Roots Music Report: Top 100 Blues Albums of 2014. Two songs on that album, Whiskey Bottle and In My Younger Days remained in the TOP 100 Songs for that same year. It is a great collection of live, off the floor originals and a few well placed covers that resonate well with blues fans of every vintage. Harpdog's original How Come is a fan favourite and earned regular rotation on BB King's Bluesville on SiriusXM. Harpdog has won four Maple Blues Awards as Harmonica Player of the Year (2014/2015/2016/2019) and has claimed the Fraser Valley Music Award. In 2016 and again in 2019, he was nominated for 3 Maple Blues Awards (Harmonica Player, Male Vocalist and Album of the Year) for his albums Travelin’ With The Blues and For Love & Money. Travelin' With The Blues released in 2016 and follows his Top 20 charting 2014 release What It Is (Roots Music Report International Blues Albums). For Love & Money was released in 2019 and debuted at #6 on the Living Blues Radio Charts where it stayed for a few months. It also reached #1 in Canada on the Roots Music Report as well as #1 in Classic Blues Internationally and reached #9 on their International Blues Chart as well. The awards and accolades continue as he was recently (2019) nominated for Best Blues Band by the Washington Blues Society! As Harpdog recently put it, "After more than 40 years of blood, sweat and tears, it feels like I'm just getting started. I'm only 58 - that's a teenager, in the blues world!" Born in Edmonton, Alberta and based in Vancouver, British Columbia, he’s crossed tens of thousands of miles playing club dates and festivals in Canada, North Western United States and Germany. “This band could play anywhere in the world, in any venue, large or small, and blues fans of all stripes would love this show." - Holger Petersen, SiriusXM, CKUA and CBC broadcaster and President of Stony Plain Records
Highlights
Art type: Live Music
Music type: Original Music
What this Artist plays most of the time
Genre: BluesJazzRoots
Home base: Vancouver
Appeals most (but not limited) to:
Activity
Events booked with Stagehand
2
Upcoming Events
No upcoming events
See all events
More Photos
Download
Download
Download
Availability