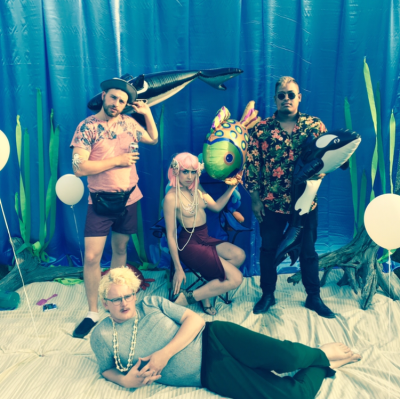 Sign InSign Up
About
Future Womb's honest and intricate lyrics tug at your heart strings, while a darker shade of groovy psych pop gently rocks you through your existential crisis.
Future Womb is the brainchild of multidisciplinary Calgary artist, Mikaela Cochrane. With collaborators Jordan Moe (guitar) and Michael De Souza (bass) of local folkadelic quintet The Ashley Hundred, and Andrew Ellergodt of Andrew’s Pale Horses, bringing the groove, this new project's eclectic sound will keep you guessing. Despite only forming in Summer 2017, Future Womb has performed at a number of Alberta festivals, as well as in live sessions on both CKUA radio's The Spot and CJSW radio's Suffragette City. Their debut full-length album, BABYGIRLGALACTIC is currently in the works with Mikaela's brother and mentor, Taylor Cochrane (Musician behind 36?, Jason Famous & Le Fame, Fuck Boy), as producer. BABYGIRLGALACTIC is an eleven track autobiographical concept album exploring the sexual and relationship trauma that Mikaela experienced over the four years that this album documents. The name comes from the feeling she had of fitting into a role of an obedient and palatable woman, while also recognizing the infinite potential inside herself to be so much more; the frustration, humiliation, and illusion of power in the choice to stay small. "Captivating audiences with her pure voice, dark lyrics, eccentric costumes and makeup, and dramatic stage presence, Future Womb quashes the belief that music is just an auditory experience -- which is largely a result of Cochrane's background in acting, musical theatre, and burlesque." [Laurel McLean, Local Drop; Issue 7, September 2018]
Highlights
Art type: Live Music
Music type: Original Music
What this Artist plays most of the time
Genre: PopPunkR&B
Home base: Calgary
Appeals most (but not limited) to: All genders, 18-35
Top Venues Performed/Exhibited *
Commonwealth - Femme Wave 2017
2017/11
Last Best Brewery - BIG Winter Classic 2018
2018/01
The Lilypad - Frog Fest 2018
2018/06
* Unverified
Activity
Events booked with Stagehand
0
Upcoming Events
No upcoming events
See all events
More Photos
Download
Download
Download
Availability