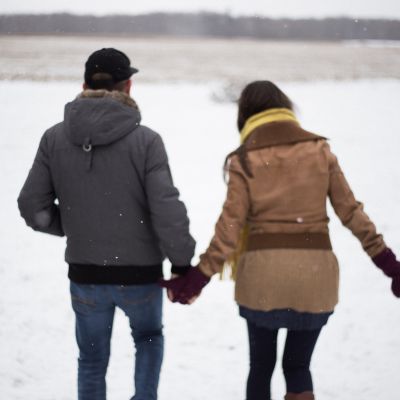 Sign InSign Up
About
Albums that arrive out of the blue like this are one of the reasons why we as music critics do what we do. Twas Now’s ‘Flesh And Bone’ is a terrific find.” – folking.com (UK)
For anyone who has lived in Kitchener, Ontario since the 1980s, it’s a safe bet they know the enigmatic graffiti adorning a prominent railroad bridge that simply states, “Twas Now.” No one really knows who put it there or what it means, but for the duo of Mike and Diana Erb, they’ve found a message within it that has come to embody their approach to making music. In adopting the name Twas Now, the Erbs felt it encompassed their vision of combining the oldest forms of folk and country music with modern lyrics and attitude. They proved definitively how capable they are at mining the past with their 2018 Canadian Folk Music Award-nominated debut album Old Fashioned Way, which featured songs by the Carter Family, the Louvin Brothers, Hank Williams and others. Now with Flesh & Bone, the pair put their own songwriting talents on display while musically adhering to roots traditions. Teaming again with producer John “Beetle” Bailey, whose resume includes work with Serena Ryder, Alex Cuba and Molly Johnson, the Erbs laid down the 11 songs on Flesh & Bone in the relaxed atmosphere of their family cottage, beginning with just their voices and acoustic guitars. Mike began the overdubbing process afterward, which was finished through the help of renowned local players such as fiddler Shane Guse, upright bassist Mark McIntyre, and pedal steel guitarist Steve Wood. In many ways, the Erbs believe Flesh & Bone is the culmination of everything about music they’ve learned on their own to this point, and also the first step on the path toward an entirely new level of creativity. “We started off by playing traditional folk and country tunes that had two-part harmony carrying most of the song,” Mike says. “Our original music has grown from there, but we still draw from artists like the Carter Family. In fact, we couldn’t help including one of their songs on this record [‘Poor Orphan Child’]. Mother Maybelle’s guitar technique remains the foundation on which we base a lot of our writing.” Diana adds, “At the same time, we’ve both been inspired a lot recently by Margo Price and Brandi Carlile. Their albums sound amazing, both from a performance and production standpoint, but more importantly they are artists with fierce determination to show the world that women do belong at the top of the music chain.” That non-traditional spirit boldly shines through on several tracks on Flesh & Bone, particularly “Black Coffee,” written in the wake of personal experiences with the generally taboo subjects of infertility and miscarriage. Another is “Part Of Me,” inspired by friends’ courage to come out, and in the process change the structure of their families through choosing truth and love. However, they don’t shy away from revealing their sense of humour, most evident on “Confessin’ Profession Blues,” a swinging tune that tackles the age-old dilemma of whether or not the grass is truly greener on the other side of the fence. At this point for the Erbs, it’s hard to tell which side of the fence they’re on, since music is the central focus of their lives more than ever. On top of Twas Now, they operate a successful music school and maintain long associations with others in the K-W music community. Although Mike was doing other things for a time, including serving as bandleader for Dawn Langstroth, and playing around New York City’s Lower East Side with the likes of Hugh Christopher Brown, Richard Julian and Tony Scherr, he never felt the urge to abandon his family’s strong ties to Waterloo Region. Meanwhile, along with working on music, Diana was and continues to be an accomplished visual artist whose work has been extensively exhibited. She now creates work strictly on commission, given how focused the pair now are on music. “As we keep writing together, the process gets more and more exciting,” she says. “For a lot of the songs on the album, we would take the spark of a lyrical or melodic idea, grab a guitar and start bouncing ideas off each other. Once the ball got rolling, things seemed to come very quickly.” Mike explains, “We pride ourselves in being perfectionists, meaning we will workshop something until we have exactly what we want to say on the page. It’s a constant cycle of evaluation and editing until a song is ready to record, and in that sense we’re really proud of how all of these songs turned out.” Twas Now—we can all thank whatever mysterious hand painted those words on that bridge for helping to give us one of the best new duos on the Canadian folk music scene. Although the album is called Flesh & Bone, it’s sure to capture a lot of hearts and minds.
Highlights
Art type: Live Music
Music type: Original Music
What this Artist plays most of the time
Genre: AmericanaRoots
Home base: New Hamburg
Appeals most (but not limited) to:
Activity
Events booked with Stagehand
0
Upcoming Events
No upcoming events
See all events
More Photos
Download
Download
Availability