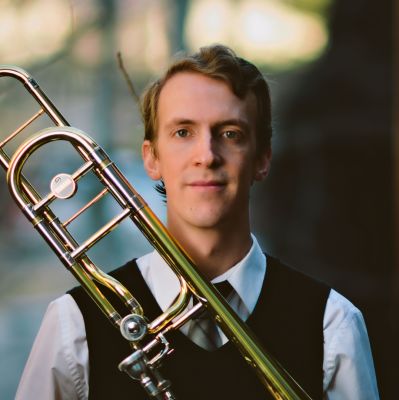 Sign InSign Up
About
I play original and traditional jazz concerts with a variety of talented players to create a different experience at each concert. No concert is ever the same.
Michael Callander began piano lessons at the age of 5 and continued studying privately with Dorothea Johansen until the age of 12. In Grade 7 he joined the band program and learned trombone on his grandfather’s instrument, a 1960’s Yale Super. Playing in the junior and senior high school jazz bands, he had the opportunity to learn from many fantastic teachers and guest artists including Al Kay, who sparked his interest in jazz performance as far back as grade 10. After graduating from Dr. E. P. Scarlett High School, Michael started the journey towards becoming a band teacher, but with a serious focus in jazz. He went to Toronto to study privately with world-renowned jazz trombonist Al Kay at Humber College. The following year Michael took lessons with William Carn before returning to Calgary to pursue a combined degree in music and education. He has studied classical trombone with Jim Scott at the University of Calgary and conducting with Gareth Jones. He plays with many Calgary jazz groups including the Calgary Jazz Orchestra, Jim Hutchison Jazz Works, and other groups. He has performed with a wide range of artists, and bands including Al Muirhead, Alex Dean, Barry Shaw, Bryan Lynch, Christian McBride, Cory Weeds, Dick Oatts, Ingrid Jensen, Luis Bonilla, Jon Ladines, and the Prime time Big Band
Highlights
Art type: Live Music
Music type: Original Music
What this Artist plays most of the time
Genre: JazzClassical
Home base: Calgary
Appeals most (but not limited) to:
Top Stages Played *
Ironwood Stage and Grill
2018/10
The Banff Center
2019/07
The Rec Room
2019/11
* Unverified
Activity
Events booked with Stagehand
0
Upcoming Events
No upcoming events
See all events
More Photos
Download
Download
Download
Availability