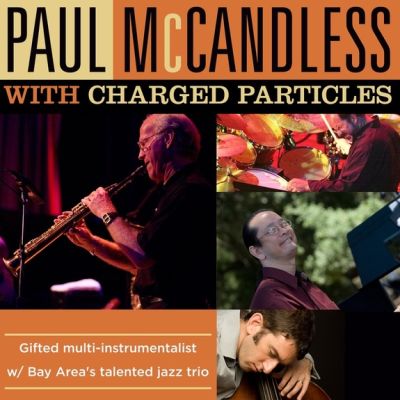 Sign InSign Up
About
Grammy Award winner and world renowned jazz superstar Paul McCandless is now touring and performing his original compositions with the celebrated Bay-Area jazz trio Charged Particles.
During a distinguished career spanning over four decades, McCandless brings a soaring lyricism to his playing and composing that has been integral to the ensemble sound of two seminal iconic bands of jazz: the original Paul Winter Consort and the relentlessly innovative quartet, OREGON. A gifted multi-instrumentalist and composer, he specializes in the oboe, English horn, bass clarinet, soprano and sopranino saxophones and a collection of folk flutes reflecting his grounding in both classical and jazz disciplines. Trained at the Manhattan School of Music, he was a finalist in the 1971 English horn auditions for the New York Philharmonic. As a collaborator and solo artist, he has performed on more than 200 albums and appeared with such musicians as Pat Metheny, Jaco Pastorius, Wynton Marsalis, Lyle Mays, Mark Isham, Boz Scaggs, Steve Reich, Al Jarreau, Bruce Hornsby, Art Lande, Carla Bley, Michael McDonald, Tony Furtado, the String Cheese Incident, Nguyen Le, Proteus 7, Fred Simon, and many more. In 1996, he won a Grammy for Best Pop Instrumental with Béla Fleck and the Flecktones. McCandless’ fine-tuned compositional skills have been featured in a number of film scores. Most notably, he wrote music for the video Squanto and the First Thanksgiving, a Rabbit Ears Production, with Graham Greene as narrator. Paul recorded three of his orchestral scores for a CD called “Oregon In Moscow”, featuring OREGON and the Moscow Tchaikovsky Orchestra. “Round Robin,” the opening track, received two 2001 Grammy nominations for Best Instrumental Composition and Best Instrumental Arrangement. As an orchestral soloist, he has performed with the Camerata Chamber Orchestra of Mexico City, the St. Paul Chamber Orchestra, and the Philadelphia, Buffalo, Los Angeles, and Stuttgart Symphony Orchestras. McCandless was a featured soloist alongside Pat Metheny and Gary Burton at “The Great Jubilee Concert”, a huge tribute event in Theaterhaus Stuttgart in 2015, by the SWR Big Band celebrating the music and the career of the legendary German bassist Eberhard Weber. The event was encapsulated on the CD “Hommage a Eberhard Weber” (2015, ECM Records). McCandless appears on two of Weber’s CDs as a leader. The London Telegraph called McCandless' contributions to the concert "remarkable". Said Jazz Journal, "Paul McCandless delivered terrific, beautifully modulated solos on both oboe and soprano." McCandless has been called "one of only a handful of master oboists playing jazz" by the Marin Independent Journal. And of one of McCandless' own group's concerts, the Washington Post said: "the group deftly explored more imaginatively orchestrated pieces, balancing contemplative and colorfully textured works that made use of a broad variety of mostly reed instruments (and an electronic wind synthesizer) with more rhythmically aggressive pieces that were often marked by spirited and sometimes rhapsodic improvisations by McCandless". The South China Morning Post said he is "a particular pleasure to hear." Said the Birmingham Post, "McCandless soars". And the Washington Post described McCandless as a "stellar player" and as offering "sparkling harmonic cascades." The Jerusalem Post said when McCandless performs, he "sprinkles feather-light soprano saxophone touches."
Highlights
Art type: Live Music
Music type: Cover Music
What this Artist plays most of the time
Genre: JazzOther
Home base: Palo Alto, California
Appeals most (but not limited) to:
Activity
Events booked with Stagehand
0
Upcoming Events
No upcoming events
See all events
More Photos
Download
Availability