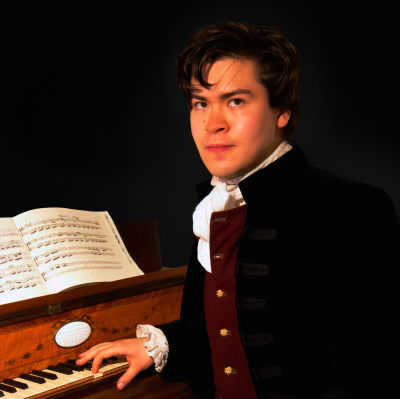 Sign InSign Up
About
Historical Keyboard Specialist (Harpsichord, Forte-piano)
Anders Muskens (b. 1993) is a Canadian professional early keyboard specialist and ensemble director. He began piano studies at the age of 4 in Edmonton, Alberta, Canada and completed an Associate Diploma in modern piano from the Royal Conservatory of Music, Toronto under the tutelage of Dr. Irina Konovalov. He completed a Masters in historical performance on forte-piano and harpsichord at the Royal Conservatoire of The Hague under Dr. Bart van Oort and Petra Somlai, with Fabio Bonizzoni and Patrick Ayrton for harpsichord. He completed his master’s thesis under the supervision of Dr. Anna Scott and Dr. Jed Wentz on the application of late eighteenth-century rhetorical acting to musical performance. He will prospectively continue this research under the supervision of Prof. Dr. Matthew Gardner as a PhD in musicology at the Eberhard Karls University of Tübingen in Fall 2020. He has received recognition as an international artist and has performed in Europe and North America. He received numerous awards and scholarships, including: first place at the Early Music Young Ensemble Competition at the London Exhibition of Early Music 2018 in a duo with soprano Tinka Pypker; the „Hofkapelle Elbe-Elster“ für das Jahr 2019 prize at the „Gebrüder Graun Prize“ 2018 in Bad Liebenwerda, DE with his ensemble Das Neue Mannheimer Orchester (DNMO); and more. In February 2020, he directed the orchestra’s first opera production: a revival of Johann Christian Bach’s 1767 opera seria, Carattaco, and he will direct the company’s next opera production: a revival of Gian Francesco de Majo’s serenata, La gara delle grazie at the Grachtenfestival in Amsterdam. He has released several singles and albums, which are available on Spotify and other streaming platforms. He was chosen as an Artist in Residence on solo fortepiano and harpsichord at the National Music Centre in Calgary (CA), and he has played solo programmes and with ensemble in the Utrecht Early Music Festival Fabulous Fringe (NL), the London International Exhibition of Early Music (UK), the MAfestival Brugge (BE), the Laus Polyphoniae Festival Antwerp (BE), the Grachtenfestival in Amsterdam (NL), the Geelvinck Fortepiano Museum in Zutphen (NL), and the Wahrenbrücker Graun-Festtage (DE). He will play in the “I Concerti di Campagna” concert series in Monte Compatri, near Rome (IT) and the Fortepiano festival in Wolfenbüttel (DE).
Highlights
Art type: Live Music
Music type: Original Music
What this Artist plays most of the time
Genre: ClassicalFolkInstrumental
Home base: Edmonton
Appeals most (but not limited) to:
Activity
Events booked with Stagehand
0
Upcoming Events
No upcoming events
See all events
More Photos
Download
Availability