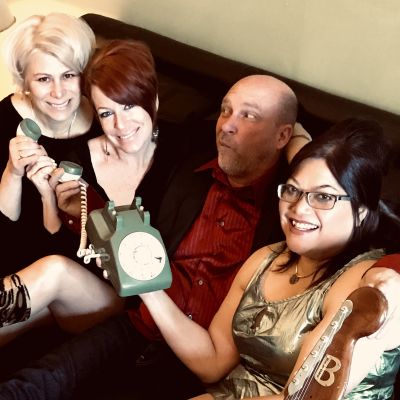 Sign InSign Up
About
The Lovebullies
The Lovebullies (Paul Jahn, Joni Brent, Chantal Vitalis and Caroline Connolly) have been playing together for over a decade. Their vintage-pop-rock vibe, combined with a high octane visually dynamic stage show, makes them favourites of the Calgary music scene. They have entertained crowds at Juno Fest, Tour of Alberta, South Country Fair, East Coulee Music Festival, Women's Marches, AMPIA Awards, Calgary's White Hat Awards, many high end corporate and municipal events along with private parties, weddings and house concerts.They've had the pleasure of warming up the stage for acts such as The Beach Boys, Alex Cuba, George Canyon, Big Sugar and The B-52's. In June of 2019 they were thrilled to have taped an hour of original music for the television show Stampede City Sessions. Connolly and Vitalis compose songs that have won awards and accolades and have been featured in television, feature film and music videos. Along with finishing their third studio album of original material (to be released in 2020), they also proudly contributed a track to the Calgary Folk Festival's 40th Anniversary record entitled "Cover Art" (recorded at The National Music Centre). Honey-soaked lead vocals, electrifying guitar, raw and rambunctious bass and drums, on point harmonies and a good-looking wardrobe are the elements that make The Lovebullies a highly watchable, fun and funny band. Throw in highly original tunes that celebrate vintage pop and rock: now it's a party!
Highlights
Art type: Live Music
Music type: Original Music
What this Artist plays most of the time
Genre: Indie RockPopSinger/Songwriter
Home base: Calgary
Appeals most (but not limited) to: Our demographic is between 25-65 and watches KSPS-PBS, listens to CJSW, CKUA and CBC, and reads the YYScene, Calgary Herald and BeatRoute. They attend large gatherings (Women's March, ReProm for LGBTQ2S, BBQ on the Bow, Canada Day at Olympic Plaza, South Country Fair), bars, and small events (Long & McQuade customer appreciation).
Top Venues Performed/Exhibited *
Webber Academy (taping tv show Stampede City Sessions for KSPS)
2019/06
Ironwood Stage and Grill
2019/04
BBQ on the Bow
2019/08
* Unverified
Activity
Events booked with Stagehand
1
Upcoming Events
No upcoming events
See all events
More Photos
Download
Download
Download
Availability