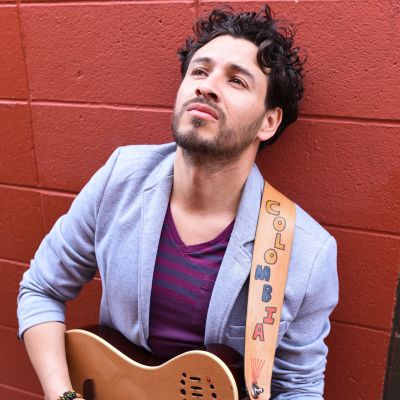 Sign InSign Up
About
De La Luna's latin fusion music is heat and light, his words and rhythms are those of the heart, friendship, hope and the pleasure of life. His voice sounds the urgency to live in the present moment.
Cristian  was born in Colombia. He grew up in the noisy bustle of “Cumbia”, “Porro” and “San Juanero”. He played in a traditional Colombian music ensemble: a “Papayera”,  where he lighted upon the unalterable passion of his life: the music. When he landed  in  Canada, he started to write songs inspirited sometimes by the nostalgia of  the troublesome story of his exile from Colombia and sometimes by the excitement of his new life in the adoption country and becoming a "new wave» Canadian.   As a culturally diverse polyglot and human rights activist, Cristian seeks with his music, promoting the unification of races and religions, crushing divisions, and dismantling the chronic neglect of those who stop dreaming.  De La Luna received a nomination to the Western Canadian Music Awards in 2013 for his album, "Puede ser" propelling him and his former band “La luna de Santiago” to various music festivals around the country. He was also recognized  in the province's most important Francophone song writing and performing contest: Polyfonik24. Where he was honoured to represent Alberta at the prestigious Western Canadian competition «Chant’Ouest» in Victoria, British Columbia. In 2017, he's awarded the prix RGE-RADARTS  and selected to do an Eastern Canada tour.  De La Luna has showcased at the Alberta Showcase, Contact Ontario, Breakout west, Contact Ouest, among national Showcases and festivals: Surrey Fusion festival, Calgary Mexifest, St Jean Baptiste Festival (Ottawa) Coup de coeur Francophone (Montreal)….. De La Luna’s new album “Sabes”  released late 2018, was awarded Latin Recording of the year at the Edmonton Music Awards 2018 (EMA) ad was nominated for the Canadian Folk Music Awards 2020 (CFMA) among other local Nominations, Cristian has been nominated  Emerging Artist at the St Albert's Mayor Celebration of the arts 2018-2019. De La Luna’s 2020 West Tour is on it’s way, get ready to dance.
Highlights
Art type: Live Music
Music type: Original Music
What this Artist plays most of the time
Genre: OtherPopSinger/Songwriter
Home base: St. Albert
Appeals most (but not limited) to:
Activity
Events booked with Stagehand
1
Upcoming Events
No upcoming events
See all events
More Photos
Download
Download
Download
Availability