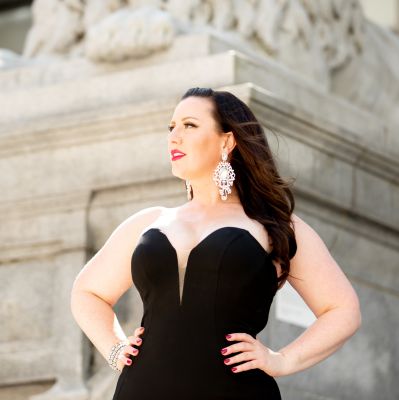 Sign InSign Up
About
Kathleen Morrison is an operatic soprano who is 'Riveting' (Opera Canada) & 'Highly professional' (Kultur Extra). Her ease on stage, vocal colour & solid technique make her an audience favourite.
“Riveting” (Opera Canada) is how Kathleen Morrison’s voice and performances have been described. Her career over the past 10 years has been based in Canada and Germany (primarily in Berlin), where she is known for her rich voice and dramatic portrayals. Previously singing the Dramatic Coloratura repertoire (Die Königin Der Nacht, Konstanze, Elettra), Kathleen has moved into the Full Lyric/Spinto repertoire (Violetta, Tosca). Highlights of Kathleen’s time in Germany include her debut with the Club-Theater Berlin in 2012 as Konstanze in Die Entführung aus dem Serail, performing for 2 seasons in the smash hit "Breakin' Mozart" in the historic Wintergarten Varieté Berlin, and numerous performances with the Kammeroper Kleinmachnow, where she was a roster singer. In November of 2014, Kathleen had the privilege of performing the role of Marzelline in Beethoven’s freedom opera, Fidelio, which was special because it was part of the official celebrations of the 25th Anniversary of the Fall of the Berlin Wall. In Canada, Kathleen has recently performed to great reviews the role of Violetta in Verdi’s La Traviata. She was the 2016 Classical Music Representative for Calgary's Year of Music. She performed the Canadian national anthem at the 10th Anniversary of the Canadian Embassy at Leipziger Platz in Berlin, is a laureate of the 2010 Jeunes Ambassadeurs Lyriques under the Théâtre Lyrichorégra 20, recipient of the Vancouver Opera Guild Career Development Grant (2010), the Enid and Clem Memorial Scholarship (2007), placed second in the 'Wettbewerb für Bel Canto Gesang’ in Wernigerode, Germany (2012). Kathleen has also been featured in The Calgary Sun, The Calgary Herald, Prince George Citizen, and on the CBC Eyeopener in her hometown of Calgary, Alberta celebrating her operatic career. She enjoys performing with the Rocky Mountain Symphony Orchestra, Calgary Civic Symphony, Mercury Opera, Cologne based Vagalume, the Calgary Concert Opera Company, and North Star Art; where in 2017 she toured 10 cities in China and sang for over 1 million people combined. ​ Aside from her performance career, she also owns and runs the highly successful 'Voice by Kathleen' studio. Highlights of her singers successes include been cast in numerous productions by Theatre Calgary & Storybook Theatre, gained admittance into arts programs at Berklee College of Music, University of McGill, University of Toronto, University of Calgary, American School of Music & Dance, Broadway Dance Centre - ISVP Professional Semester, and performed for America's Got Talent. The 'Voice by Kathleen' studio coaches singers of all genres including classical, country, pop, rap, EDM, jazz and more. Kathleen is also an avid adjudicator and masterclass presenter, having worked with the University of Lethbridge, The Calgary Arts Academy, Prince George Opera Company, Alberta Music Education Foundation and more. Kathleen also co-foudned and is the Director of Vocal studies at the prestigious Renert School. When she is not busy singing or coaching, she spends her time with her Grand Champion Trick Samoyed, Alfie. She is also a certified Trick Dog Trainer. Kathleen currently lives in Calgary, Alberta.
Highlights
Art type: Live Music
Music type: Cover Music
What this Artist plays most of the time
Genre: ClassicalClassicalOther
Home base: Calgary, Alberta
Appeals most (but not limited) to:
Activity
Events booked with Stagehand
0
Upcoming Events
No upcoming events
See all events
More Photos
Download
Download
Download
Availability