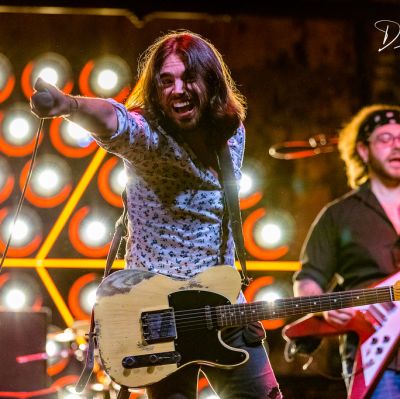 Sign InSign Up
About
We are a high energy band from NJ merging rock, soul and rnb with a modern twist on the "Asbury Park sound". From popular covers to crowd pleasing originals, fans are up and dancing by the first song.
"Ryan is no stranger to music fans on the Jersey Shore and NYC. He’s built a solid fanbase and drawn comparisons to Springsteen in both solo performances and with his high-energy band Nick Ryan and the Mess.” - Rob Dye (American Songwriter Magazine) With a sound ranging from the “heartland rock” of Asbury Park, “Memphis soul”, and modern pop, there’s a taste of familiarity with a fresh originality with Nick Ryan and the Mess. As a must see live band, the six-piece rock band takes charge of the stage in the likeness of Bruce, Prince, and Jagger, engaging their audience to a new level. The chemistry between all the members makes you feel as if you're in the band yourself, making a point to cater to audiences of all sizes. The band consists of Ryan (lead vocals, guitar), Jimmy Franklin (lead guitar, backing vocals), Lucas Perez (saxophone), Robbie Sko (keyboards), Jorden Bowen (drums, backing vocals) and Julian Michalski (bass guitar, backing vocals). Each of the members have been veterans to the New Jersey music scene and beyond for the last decade, playing world tours, stadiums and having videos on MTV. Through three short years, Nick Ryan and the Mess has made plenty noise of their own, with a video premiered through American Songwriter Magazine, releasing three songs on all streaming platforms and playing a couple hundred high energy shows. Their momentum continues in 2022 with a weekly residency at the famous Nardi's in Long Beach Island, hundreds of gigs all over the east coast and more music and videos on the way. Follow on all social media platforms for daily updates on what mess their making now! Check out www.nickryanandthemess.com for tour dates
Highlights
Art type: Live Music
Music type: Original Music
What this Artist plays most of the time
Genre: RockPopSoul
Home base: Edison, NJ
Appeals most (but not limited) to:
Top Venues Performed/Exhibited *
The Laundromat Bar, Morristown NJ
2022/02
Champs Downtown, State College PA
2022/04
Donovan's Reef, Sea Bright
2021/06
* Unverified
Activity
Events booked with Stagehand
1
Upcoming Events
See all events
More Photos
Download
Download
Download
Availability