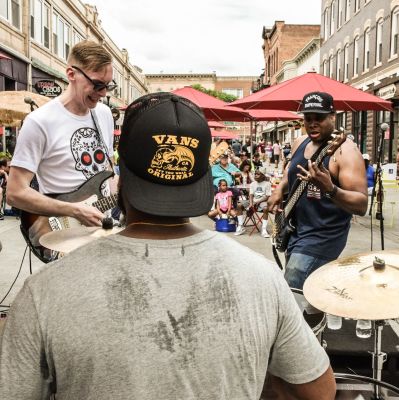 Sign InSign Up
About
Bryan Hansen Band is an award-winning 'blue eyed funk' band located in New Jersey. Members include William Blakey on Bass Guitar & Vocals, Cwan Merritt (Q) on Drums.
Bryan Hansen Band is an award-winning 'blue eyed funk' band located in New Jersey. Members include William Blakey on Bass Guitar & Vocals, Cwan Merritt (Q) on Drums. Bryan Hansen Band averages 125-160 gigs per year, performing at notable venues all through the East and West Coasts, including Winter NAMM 2020, House of Blues Anaheim, The Troubadour in WEHO, So Far Sounds NYC & DC, Asbury Lanes, The Wonder Bar, The Saint, Asbury Hotel, Laundromat Bar Morristown, Hamilton Stage at UCPAC, Maplewood Stock, Bowery Electric, West End Lounge and Cava Winery in Hamburg, NJ. Bryan Hansen Band's sound is a mix of funk, rock, soul and R&B with music influences from Stevie Wonder, Dave Matthews Band, John Mayer, Al Green and Victor Wooten. They're proudly endorsed by Godin Guitars & BG France. Singer songwriter Bryan Hansen has been performing since the age of 15. He learned how to play the guitar at 11 when his father re-strung his Fender Stratocaster that had been collecting dust under the bed for over 10 years. In 2009, Hansen recorded his first solo EP called "Ebb & Flow." Produced by Sean Baker in Hansen's home studio, 'Ebb & Flow' was a concept record about a relationship from beginning to end. Bryan Hansen's first full length album, Brothers Among Wolves was released in August 2013. The album was produced by Stephen Kaminski and featured 18 different musicians from the Tri-State Area. In Fall 2013, after performing over 85 shows with the studio musicians from Brothers Among Wolves, Hansen paired up with musicians William Blakey & Cwan Merritt to perform with him as the Bryan Hansen Band. This created the shift from singer-songwriter to funk power trio. Fall 2016 Bryan Hansen Band released its sophomore record 'When You Stop Pulling Back.' Featuring singles "Tasteless," and "Tug Of War." On September 24th, 2016 the band played a sold out performance at the Union County Performing Arts Center Hamilton Stage with opener Kim Boyko. The album is a dedication to Bryan's late father. WBLS own Lenny Green featured the group on a live broadcast from Milk River in Brooklyn NY, coining the phrase "blue eyed soul," to explain the bands unique sound. In 2018, just weeks before heading into the studio to record their third LP, Bryan Hansen Band was struck with the devastating news that their keyboardist and brother, Hank Rosenthal had passed away tragically from a heroin overdose. Emotions ran high and they stepped into the studio to record 'Gas Money,' in honor of Hank. Gas Money was released in October 2019, featuring 8 new songs featuring singles "Diamonds," "Smiling Dashboard Jesus," and "Waiting for Tomorrow." In 2019, Bryan Hansen Band was featured as WRAT's NJ Rock Band of the Week. The record opens with the hook, "Even the dark will not be dark to you. The dark will shine like the day, for the dark is a light to you." Their album release show at The Asbury Lanes in Asbury Park, New Jersey helped to raise over $1,000 for Rutgers Recovery House in New Brunswick, New Jersey. Bryan Hansen Band continues to help fight the battle against the opioid crisis by helping to educate their fans on how they can make a difference in their community. 2020 couldn't have started off stronger for the Bryan Hansen Band. They were featured at Winter NAMM in Anaheim California, House of Blues Anaheim and got the opportunity to open for 7Horse at The Troubadour in West Hollywood. Returning home with the anticipation of a national tour, 2020 had other plans. The Bryan Hansen Band made the most of the situation by providing live streams to their fans and helping charities through virtual fundraisers for Inroads to Opportunities, JCC of Central NJ, NAACP Legal Defense Fund and helping feed frontline workers at various medical centers on both the east and west coast. In November 2020, Bryan Hansen Band teamed up with singer songwriter Kim Boyko to re-imagine the 80's holiday hit, "Christmas Wrapping," by The Waitresses, except the 2020 pandemic version. The video sparked viral success on TikTok, viewed by 113K people on the Bravo Confessionals page. Songwriter Chris Butler commented that the video was "BRILLIANT," thanking the band by sharing it on his personal page for fans around the world. Bryan Hansen Band is in pre-production for their fifth studio album to be released in Summer 2022. "We have a saying in the band that Q came up with, 'Make it Do What It Do.' It's our mantra. Gets us through the rehearsals until midnight, performances, 6 hour recording sessions and pushes us to do what it takes to get through the day." -Bryan, Will & Q.
Highlights
Art type: Live Music
Music type: Original Music
What this Artist plays most of the time
Genre: AlternativeFunk
Home base: Hillsborough
Appeals most (but not limited) to:
Activity
Events booked with Stagehand
2
Upcoming Events
No upcoming events
See all events
More Photos
Download
Download
Download
Availability