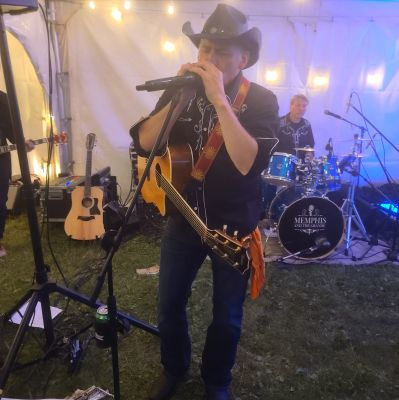 Sign InSign Up
About
A new artist three decades in the making, singer/songwriter Stephen King plays mapleleaf-infused Americana music.
Yes, my name is Stephen King. Based in Calgary since 1988, originally from the Maritimes, I’m a multi-instrumentalist but have been a guitar player and singer/songwriter for almost four decades. For a deeper look, check out: https://www.reverbnation.com/stephenking https://m.facebook.com/stephenking13/ When doing a solo show at a cafe for e.g., I try to play a mixture of original/cover tunes ... depending on gig and how the audience flows ... in a variety of musical genres and styles. Which is why I describe my sets as “Americana.” Having studied so many different musical styles for so long, it's all kinda of morphed and squished together in my current playing approach. I continue to be humbled by the journey of music! On any given night you'll see me playing acoustic guitar, harmonica, one string diddley bow, ukelele, Fender strat, dobro, Gibson es-175td, and even a guitar synth etc... depending on the feelz. I also play bass, drums, a bit of keyboards / accordian and stretching into stringed instruments like ukeleles & charangas. I have 6 self-produced CD's from about 25 years of recording ... 100% self-engineered solo efforts in different types of studios I cobbled together over the years: https://store.cdbaby.com/Artist/StephenKing. In the duo "SteveSteve," #stevesteve it's all about the "Strings and Skins" ... I team up with beatster Stephen Nykolyn who has been drumming since he was a fetus. First discovered in his teens in Ontario, he toured as an underage blues drummer, and has played in many bands since, as well as guest recorded a number of albums. Slick sick seventies beats. In the "power trio" SARAH'S LAST DAY, #sarahslastday we try to play a sonic, thoughtful, psychedelic 3 piece experience. Here's more: "Hailing from Calgary, the band plays a musical cocktail of original music from lead guitarist/singer Stephen King’s 6 CDs, along with varied covers from Wilco, Josh Rouse, Neil Young, Rihanna, Hendrix, Killers, Black Keys, Rancid, Bob Dyan, SRV, Ryan Adams, Nirvana, Beck amongst many others … all of which Sarah’s Last Day molds to their own inimitable style.” I play bass in the classic country 5-piece band “Renaissance Poets,” and also fronted "Stephen King and the Dirge" (original music) in the mid-2000’s. I’ve busked outside liquor stores, played around hundreds of campfires, house parties, house boats ... generally I like to bring the guitar out anywhere people will tolerate it! Which makes it sound like I play live a lot, which I don’t! It ebbs and flows in any given year. These are all various projects that are flexible to play with depending on the venue and the music that suits. Thanks for readin’ and listenin’ @stephdokin
Highlights
Art type: Live Music
Music type: Original Music
What this Artist plays most of the time
Genre: Singer/SongwriterAmericanaInstrumental
Home base: Calgary
Appeals most (but not limited) to: All ages seem to enjoy hanging out when we're playing ... sometimes lots of sing-a-longs too. Typical audience that I/we could draw in to a gig would specifically be ages 30 - 60.
Top Venues Performed/Exhibited *
Kawa Cafe
2018/04
The Cellar / Wine-oh's
2016/09
Gravity Espresso Bar and Cafe
2017/12
* Unverified
Activity
Events booked with Stagehand
3
Upcoming Events
No upcoming events
See all events
More Photos
Download
Download
Download
Availability

I don't stray too far from Calgary, frankly, and can play pretty well any date, evening or day with enough notice, so no constraints there. My most-oft travelled places include Vancouver, Edmonton and Seattle.