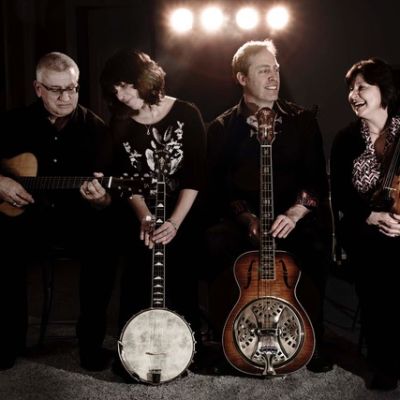 Sign InSign Up
About
Storytellers in song, Horizon Ridge are a group of fine multi-instrumentalists and seasoned singers known for their intuitive, tight harmonies and polished a cappella singing. Helen Goodchild, Steve Goodchild, Peter May and Dianne Quinton take their inspiration for music from their roots and subsequent journeys near and far. Horizon Ridge brings an engaging stage presence to their performances. With influences spanning traditional and contemporary folk, country, rock and gospel, the band is versatile and adventurous. Horizon Ridge released their first CD, Enough is all you need, in summer 2016 to audiences in Newfoundland, Alberta and British Columbia. A mix of original and cover songs, it showcases the band's ability to move effortlessly between different musical styles and genres. Many thanks to CKUA for bringing us to the airwaves! The band's second CD, Unison In Harmony, is being released early in 2020. The band members, who are based in Calgary, Alberta, have played festivals, music clubs and concerts in Canada, the US and UK. They have also taught a range of musical workshops in individual and group settings.
Highlights
Art type: Live Music
Music type: Original Music
What this Artist plays most of the time
Genre: FolkCountrySinger/Songwriter
Home base: Calgary, AB
Appeals most (but not limited) to: All ages; special appeal for those who love intricate harmonies and good stories in songs. We choose songs to fit our audiences/events.
Top Venues Performed/Exhibited *
Armstrong IPE (Interior Provincial Exhibition), Armstrong, BC 5 days, MainStage
2017/09
The Calgary Stampede since 2009
2020/07
Ironwood Stage and Grill, Inglewood, On The Edge, Weaselhead Presents 2016-2019
2019/09
* Unverified
Activity
Events booked with Stagehand
1
Upcoming Events
No upcoming events
See all events
Availability

Our availability varies and current bookings are listed on our website at www.horizonridge.ca. We travel for gigs and are easily accommodated (only 2 rooms required). Please contact us if you need music for your venue or event. We'd love to come play for you!