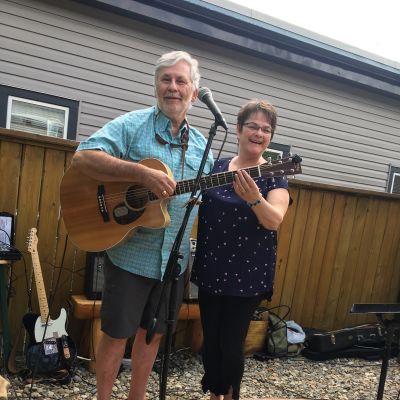 Sign InSign Up
About
Folkjazz with Jim and Lynda McLennan
Best known in the world of fly fishing, where they are both instructors, Jim and Lynda McLennan have been involved in music for all of their adult lives. Lynda McLennan has a Bachelor of Music degree and taught high-school music for many years, working with and directing choirs and bands.  Her first love, though, is singing, and in performance she puts her personal stamp on tunes from Gershwin, Foster, Berlin, and others, in a musical style that can best be described as "folk jazz." Jim McLennan’s reputation as a fingerstyle guitarist, composer and arranger has produced an enduring legacy as one of Alberta’s finest guitarists. He recorded for Stefan Grossman’s iconic Kicking Mule record label in the 1970s, and has been featured in Guitar Player magazine. Jim regularly instructs guitar at the Foothills Acoustic Music Institute’s music camps near Calgary, Alberta. Upon its release, Jim's first solo CD, Six-String Gumbo, was immediately chosen "CD of the Week" by CKUA Radio’s Peter North. The CD was a Western Canadian Music Award finalist for Instrumental Recording of the Year. Veteran music writer Alan Kellogg, writing in Penguin Eggs magazine, said this about Six-String Gumbo: "Six-String Gumbo is a canny collection of diverse work – stretching from Dvorak to Joplin to Billy Joel to Jerry Reed – along with original tunes that showcase the player’s alchemy in transforming solo guitar to a near-orchestral realm. Hackneyed “one man band” clichés just don’t cover this kind of mature artistry." The McLennans’ 2014 CD, Dancing On Air, features Lynda’s voice and Jim’s guitar, and has received significant airplay on Alberta’s CKUA radio. A Jim and Lynda McLennan performance includes instrumental guitar pieces from Jim (many from Six-String Gumbo) and vocal tunes from Lynda. One moment it’s a “folkafied” version of a standard like Ain’t Misbehavin’ or Fly Me to the Moon, next up might be an acoustic nod to the R&B world of Sam Cooke or Curtis Mayfield. The only criteria for a McLennan interpretation of a tune is that it be a great song. Much of their music is recognized and loved by their listeners. Seasoned performers, their genuine and engaging stage demeanor immediately puts audiences at ease. They have performed at Festival Place in Sherwood Park, the mid-Winter Roots and Blues Festival in Edmonton, the On the Edge Concert Series, Carlson’s on Macleod in High River, the Room Full of Sound concert series in Okotoks, Mikey’s Juke Joint in Calgary, the Blue Chair in Edmonton, the Canmore Folk Festival, and at numerous house concerts and other acoustic music venues. In addition to performances, Jim often leads workshops on a variety of guitar-related topics. These often work well the afternoon of an evening performance.
Highlights
Art type: Live Music
Music type: Original Music
What this Artist plays most of the time
Genre: BluesFolkJazzOtherR&BRootsSinger/Songwriter
Home base: Longview, AB
Appeals most (but not limited) to: Audiences of all ages interested in jazz standards and strong acoustic guitar playing.
Top Venues Performed/Exhibited *
Rocky Mountain Folk Club
2019/04
Westwood
2018/02
Little Concerts
2017/09
* Unverified
Activity
Events booked with Stagehand
1
Upcoming Events
No upcoming events
See all events
Availability