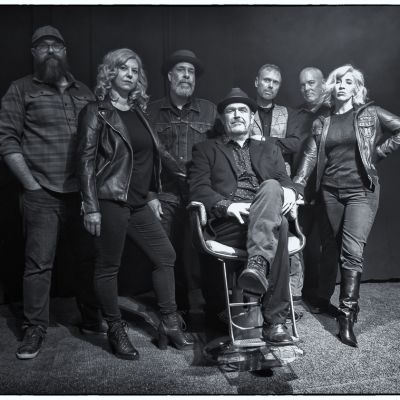 Sign InSign Up
About
The Brother Bicker Band is a high-energy, original rock band from Calgary playing what we like to call "maple whiskey rock n roll" in both fully plugged or "unplugged" acoustic.
Close your eyes... picture where you were the first time that you heard that really, really great song... the first one that comes to mind - the song with the jangling guitars, pounding drums, thumping bass, moaning organ, three part harmonies, and the lyrics that spoke directly to you. The one that changed your life. The song, that every time you hear it, takes you back to a memory, a feeling, a love, a loss, an amazing moment time.. . Open your eyes and fast forward five, ten, fifteen or maybe even thirty years (or more).... the Brother Bicker Band is trying to recapture that memory, that feeling, that love, that loss and that amazing moment in time with every song that they play, original or cover. Featuring Carl "Bash" Raines on drums, Patrick "Duff" Down on bass, Jeremy Hrdlicka on vocals and acoustic guitar, Tom Mogan on guitar and vocals, and Ben Ellard on keys and vocals, these five friends and band mates bring a unique and refreshing take on the "roots" rock genre, best described as "maple whiskey rock n roll" - well-aged and a little bit harsh, it may burn a little at first. It has a touch of sweetness and is uniquely Canadian. And like whiskey, the more you indulge, the more fun you have and the better you feel....and if you have too much you just may forget everything. The band is also exploring its softer side playing acoustically as a band and as a duo and is available to play smaller more intimate venues with new "unplugged" takes on its original songs and and tasty covers.
Highlights
Art type: Live Music
Music type: Original Music
What this Artist plays most of the time
Genre: AlternativeClassic RockRock
Home base: Calgary
Appeals most (but not limited) to: 30 +, spend lots of money on food and drink
Top Venues Performed/Exhibited *
Ironwood Stage & Grill
2016/12
Lilac Festival
2017/06
Rogers Hometown Hockey
2018/02
* Unverified
Activity
Events booked with Stagehand
1
Upcoming Events
No upcoming events
See all events
More Photos
Download
Download
Download
Availability