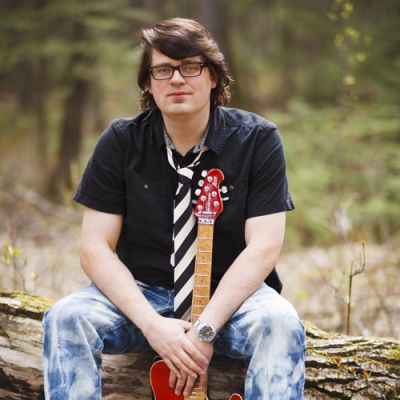 Sign InSign Up
About
Versatile singer/songwriter and talented guitarist inspired by the greats of the 60s, 70s, 80s and 90s. Born in Camrose, Alberta, raised in Japan. Bilingual.
Hailing from Camrose, Alberta, Canada, David Andrew Wiebe is a multi-talented guitarist, vocalist, and songwriter. He grew up in Takarazuka, Hyogo, Japan, where he went to public school from kindergarten to grade eight, and became fluent in the Japanese language. At the time, he was immersed in manga (Japanese comics), video games and artwork. Music mostly served as a backdrop to those activities, but he recalls enjoying J-Rock duo B’z as well as J-Pop duo CHAGE&ASKA growing up. When Wiebe was 13, his father crashed his motorcycle into the side of a transport truck. He was in a coma for about 10 days, but ultimately passed away. It was then that the Wiebe family made the decision to move back to Canada. Meanwhile, Mrs. Sasaki – a friend of Wiebe’s father – offered him a nylon-string acoustic guitar. Alas, she couldn’t actually deliver the guitar before Wiebe moved back to Canada. However, in due course, she travelled all the way out to Drumheller, Alberta, to deliver that guitar to his grandparent’s home. The guitar sat in Wiebe’s closet for a couple of years at his home in Calgary, Alberta, but when he saw his friend play a handful of popular songs on his guitar at summer camp, he came away determined to learn to play. At 17, Wiebe began learning guitar at a ferocious rate, and his guitar teacher, Jason Johnson, says he surpassed him within two lessons! Wiebe credits Johnson for giving him the solid foundation he needed on his instrument, and also says he owes a great deal to his other teachers and mentors: guitar repairman Tom Martin, veteran Brian Griffiths, MI graduate Shawn Johnsen, jazz instructor Jim Riley, and virtuoso Daniel Guy Martin for his growth. In 2006, Wiebe released his first solo album, Shipwrecked… My Sentiments. During production, his cousin Mitchell took his own life. It was already a tumultuous time for Wiebe, who was feeling disillusioned with multiple band projects all ending in shambles. Wiebe’s musical journey, however, would continue on, and today he has multiple session playing and engineering credits to his name, including Active Light’s Active Light EP, Jonathan Ferguson’s Sweeter After Difficulties, Andrew Riches’ 12 String Monster, and Long Jon Lev's Telltale Heart. Since 2016, Wiebe has been actively releasing new music, and has added several new singles to his catalog: "Fragments", "City Lights", "Don't Wait Too Long", "Hope", "Waves", and "Your Eyes Give It Away". In 2018, he also re-released the Demos 2010 compilation as Fire Your God, and has plans of sharing more new music with the world.
Highlights
Art type: Live Music
Music type: Original Music
What this Artist plays most of the time
Genre: PopRockSinger/Songwriter
Home base: Calgary
Appeals most (but not limited) to: Fans of 90s pop music, Barenaked Ladies, Elvis Costello, John Frusciante, Incubus, Green Day, Eric Clapton, Jimi Hendrix, Hoobastank, and Pearl Jam.
Top Venues Performed/Exhibited *
Strathmore Stampede Grounds
2018/07
* Unverified
Activity
Events booked with Stagehand
0
Upcoming Events
No upcoming events
See all events
More Photos
Download
Availability

Available for bookings most Friday and Saturday nights, unless I'm already performing or helping organize an event elsewhere.