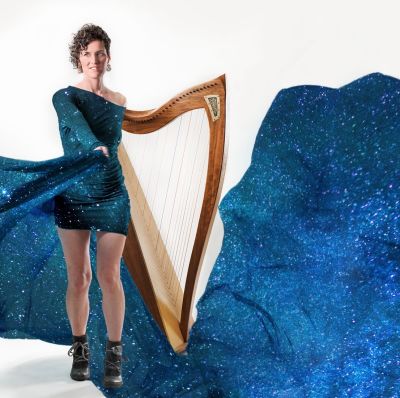 Sign InSign Up
About
Diemm: Crystalline vocals. Lyrics like arrows. Ethereal folk harp. Diemm plays original Chamber Folk music, with poetry that tugs at the layers between conscious and subconscious mind.
Diemm plays folk harp and sings. She plays for that one note, that one resonant chord that opens a cascade of ‘yes’ inside you. Her harp strings weave dense landscapes of rhythm and melody. Her voice is a bell, ringing you home. Diemm’s debut album ‘Ten Thousand Miracles’ launched September 2018. This album is a tapestry of harp, double bass, and percussion, with the kind of vocal harmonies that give chills - and some genre-bending spoken word poetry, too. Her genre is Chamber Folk. The artist she's most compared to is Joni Mitchell, the poet she's most compared to is Rumi. Find the album on Spotify here: https://open.spotify.com/album/02244EBF2rW8SV3QfUzNs1?si=1Z4i_THkR7yPc735cMvJNg Diemm is singer-songwriter Dawna McLennan. Diemm performs solo, as a duo, or as a trio. The full trio includes double bass or cello, percussion, and of course Diemm's harp and vocals. She’s performed previously under the name HarpPixie, playing House Concerts and Cafes around BC, and on festival stages like Starbelly Jam, Salmon Arm R&B,Tiny Lights Festival. She’s been awarded grants from FACTOR Canada, Creative BC and Columbia Basin Trust, to pursue her musical visions. Diemm’s concerts blur the line between performance and transformational offering. As a workshop leader and as a performer, Diemm holds hands with the Muse and bows to the power of music to align and illuminate. You’ll leave lighter, clearer, and more inspired than when you walked in, as though you’ve sprouted wings. Visit www.diemm.ca for links, videos, and to join her mailing list.
Highlights
Art type: Live Music
Music type: Original Music
What this Artist plays most of the time
Genre: Singer/SongwriterFolkSpoken Word
Home base: Kaslo BC
Appeals most (but not limited) to: Socially conscious, community oriented, holistic, creative, educated, self-aware, illuminated folkies.
Top Venues Performed/Exhibited *
Salmon Arm Roots and Blues Festival, Salmon Arm BC - as HarpPixie Trio
2016/08
Starbelly Jam Festival, Crawford Bay BC - as HarpPixie Trio
2016/07
Vancouver East Cultural Centre, East Vancouver BC - as guest performer with Small Town Artillery
2018/09
* Unverified
Activity
Events booked with Stagehand
2
Upcoming Events
No upcoming events
See all events
More Photos
Download
Download
Download
Availability