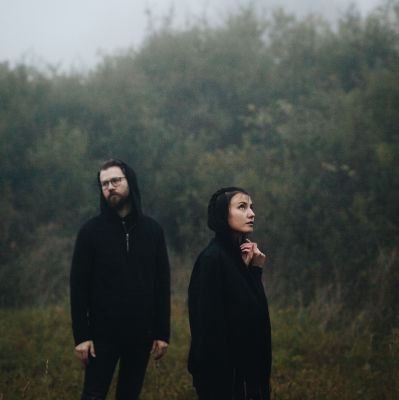 Sign InSign Up
About
ba:zel is the electroacoustic love child of Ewelina Chiu and Daniel Vlcek, balancing startling fragility and massively dark undertones, both pop and avantgarde, post and neoclassical.
ba:zel is the electroacoustic love child of Daniel Vlček and Ewelina Chiu, born in 2014 on a whim when the two were near strangers. The project features Ewelina on vocals, soprano flute, keyboard, and midi pedal and Daniel on bass guitar, beats, and synths. ba:zel is a precarious balance between startling fragility and massively dark undertones, post-grime beats mingled with the neo-classical, connected by a soprano insidious to some, child-like and secretive to others. The project has been variously labelled as “frosty minimalism” (BeeHype), “nightmare electro-pop” (AlterEcho), “chilly art-hop” (RadioWave), and “music for sleep-deprived ravers” (180 a.m collective). Since forming ba:zel has played many concerts both at home and abroad, developed its sound, and taken to using its own projections during concerts, prompting Beehype’s description of the project as “a heady postmodern audiovisual dialogue.” ba:zel sound spans genres and works in intimate atmospheres as well as a larger stage. As RadioWave aptly puts, “ba:zel’s sound is as at home in an art gallery as it is in a nightclub.” In February of 2016, ba:zel released its first single 'agave.' Shortly thereafter ba:zel released its second single 'PACE,' and on 20 June 2016 its debut album 'eye draw(s) the line.'  In August 2016 ba:zel was one of six projects nominated for CZECHING, a project run by the national Czech radio striving to support Czech music abroad. Within the scope of this project, ba:zel was voted number one by Czech radio listeners.  ba:zel asked four Czech producers to remix their track ‘PACE’ and collaborated with Slovenian producer Gasper Santl reworking the track ‘Mandatory.’ These tracks were put out on the RMX EP in April 2017 followed closely by the Scene 7 EP, noted for its evolution in the project’s sound as “overall braver and bolder” (DNA Muzyki). Over the course of 2015-16, ba:zel worked with documentary film maker Andrea Culkova, supplying three tracks to her newest work, H*ART ON. The film premiered at the International Leipzeg Festival for Documentary and Animated Films (DOK) in 2016. In addition to creating its own brand of electro-acoustic music, ba:zel works with creating conceptual soundtracks and experimental improvisations, both independently and in collaboration with visual artists and performers. ba:zel performed at the applied acoustics festival Gold Rain in Cologne in 2015 and played an improvisational live set to the silent soviet avant-garde film Salt for Svanetia (1930) at the Jihlava International Documentary Film Festival in 2016. Recently ba:zel collaborated with Brooklyn based artist Kara Rooney, performing live with her performance "Translation," at the Meetfactory in Prague. ba:zel also provided the sound for the Na Shledanou gallery's virtual reality project and Czech painter Josef Bolf’s installation “Sapnunngsobgen,” recently bought by the Czech National Gallery. Currently ba:zel is working with New York based director Bara Jichova Tyson on her upcoming documentary Consuming Others. In 2017 ba:zel was selected to play two major European festivals, Vienna Waves and Colours of Ostrava. In 2018 ba:zel was invited to play in Paris at the Grand Palais as part of the significant exhibition on seminal Czech abstract painter František Kupka.
Highlights
Art type: Live Music
Music type: Original Music
What this Artist plays most of the time
Genre: AlternativeElectronic
Home base: Prague
Appeals most (but not limited) to: very diverse. we are consistently pleasantly surprised by the capacity of our music to reach various demographics. although we had originally thought the music was geared mainly to the millenial demographic (people our own age), we have since discovered through various concert and collaboration offers that our music appeals also to a much younger demographic (18-21) and a much older (70+).
Top Venues Performed/Exhibited *
Grand Palais- Paris, France
2018/06
Colours of Ostrava- Electronic Stage
2017/07
Vienna Waves
2017/10
* Unverified
Activity
Events booked with Stagehand
0
Upcoming Events
No upcoming events
See all events
More Photos
Download
Download
Download
Availability

calgary (and surrounding area) 27-29 of august and september 2