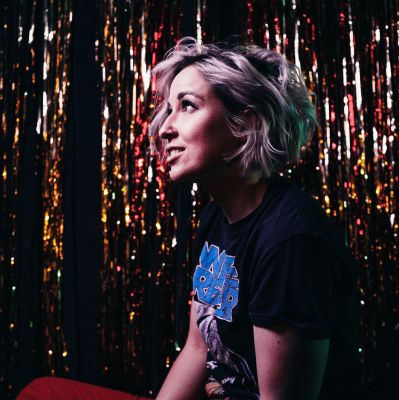 Sign InSign Up
About
“Canadian singer-songwriter Amelie Patterson is one of music’s most exciting artists.” - Pop Culturalist, 2019
Bow Valley folk-pop songwriter Amelie Patterson is a pop music workhorse with hooks to spare. Her new single, the dazzling alt-pop ‘Let Your Trouble Go’ is about empathy, and “wishing you could hold a loved one's burden for them,” Amelie Patterson describes, making space for a loved one so they can “take the afternoon off.” Amelie penned the song in New Orleans in January of 2020 to the beat of French Quarter buskers. By the time she took the idea to producer Ryan Worsely (Dear Rouge, MONOWHALES, Mother Mother) in June, the world was a very different place. Worsely and Patterson took the folk fixations of the song and surrounded it with sprightly strings and a helplessly head-bopping beat. Moments of levity interrupt the cerebral track with vocal modulation and soaring chorus worthy of Imogen Heap. ‘Let Your Trouble Go’ is the latest drop from her newest concept-driven studio project, The Playlist. Rather than recording and releasing all at once, The Playlist is a stream of rolling singles, traversing the emotional, lyrical, and genre spectrum. Whatever captures Amelie’s creative imagination is harnessed and brought to the the world in a living and breathing series of songs. The first two tracks from the project have already received critical acclaim including a nomination for Alternative Recording Of The Year from the YYC Music Awards in 2020 for ‘The Patient Kind.’ Her debut album Roll Honey Roll received Alternative Recording of The Year in 2017. Amelie has performed alongside Sarah Harmer, Matt Anderson, and Serena Ryder, and has performed at festivals including the Calgary Folk Festival, BlockHeater 2020, and Stampede City Sessions. Amelie is a songwriting tour de force drawing heavy comparisons to indie-folk contemporaries including Arcade Fire, Kathleen Edwards, Begonia, and Feist. Patterson served as the inaugural poet laureate of Banff, Alberta. “Canadian singer-songwriter Amelie Patterson is one of music’s most exciting artists.” - Pop Culturalist, 2019 ​ ​ “This combination of high energy and edgy cool will be familiar to fans of Gin Wigmore, while Patterson stays close to her core indulgences of roots and Americana. The result is an energetic party song with a driving pulse, that extends the complex sensibility of Patterson’s aesthetic into the uncharted waters of electro pop and indie electronic. The Patient Kind is a vibrant exploration of the no-stress attitude that could belong to anyone with an instinct for self-satisfaction." - ChillFiltr, 2019 “Every cliché you can think of when listening to music that simply feeds your soul came to mind; “chills up my spine,” “gives me goose bumps,” “foot-tapping, head bopping.” Patterson’s music ticks all the boxes of what constitutes as a good tune and her innovation in song writing is possibly unmatched.” - Alana MacLeod, RM Outlook 2019 ​ “#cfmf16 up and comer Amelie Patterson was a highlight of my festival this year, watch out for this girl!” - John Abraham, Delirium SPB "Patterson’s vocals are bluesy and the beat is sexy, what more do you need?" - Hype Machine, 2019
Highlights
Art type: Live Music
Music type: Original Music
What this Artist plays most of the time
Genre: FolkAlternative
Home base: Banff
Appeals most (but not limited) to: Young professionals that are hard working and appreciate nature. Even split M/F 25-35
Top Venues Performed/Exhibited *
Stampede City Sessions
2019/04
Eric Harvey Theatre at the Banff Centre for Creative Arts (2017 and 2018)
2018/03
Calgary Stampede Coke Stage
2018/07
* Unverified
Activity
Events booked with Stagehand
2
Upcoming Events
No upcoming events
See all events
More Photos
Download
Download
Download
Availability