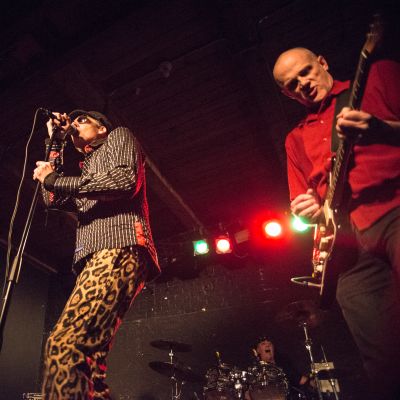 Sign InSign Up
About
The Extroverts formed in Regina in 1979, and still bring fans to their feet with high-energy, fun live shows. Catchy originals are mixed with first-wave classics, served up with passion and precision.
The Story Extroverts formed in 1979 in Regina, Saskatchewan, far away from any of the happening urban punk scenes. Crazy fun house parties, then DIY hall gigs, then nightclubs and touring throughout the prairies, including two extended stays at the legendary Calgarian Hotel. Released one 7” single in 1980, “Living in Poverty/Political Animals”. Despite writing over 50 songs in two and a half years, Extroverts disbanded before recording a full-length album. Band members Brent Caron, Eddie Lester, Grant McDonald and Hap Hazard went their separate ways, but remained pals. In 2009, the band reformed with all original members, and live shows revealed that Extroverts songs still had the same high energy, and band members were still able to deliver these songs in tight, fun, energetic sets. The Comeback Album Twelve songs with unused lyrics from 1979 and brand new music were included on the Extroverts’ first-ever album, SUPPLE, which was released in late 2016. Extroverts toured across Canada in 2016-2017. Extroverts music is firmly rooted in 1970’s UK punk/US New Wave, and they regard the UK as their spiritual musical home. The band was approved by Stiff Little Fingers to open for them during SLF’s most recent Canadian tour. 2019 marks 40 years since the Extroverts formed, and there will be a lot going on: new album, vinyl re-issues from labels in Madrid and Victoria, and lots of shows to celebrate this milestone.
Highlights
Art type: Live Music
Music type: Original Music
What this Artist plays most of the time
Genre: Indie RockPunk
Home base: Regina
Appeals most (but not limited) to:
Activity
Events booked with Stagehand
0
Upcoming Events
No upcoming events
See all events
More Photos
Download
Download
Download
Availability