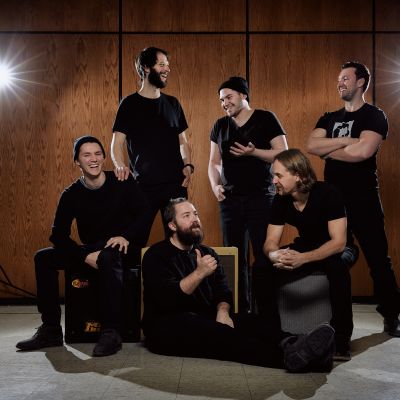 Sign InSign Up
About
The mayhem, madness, and melancholy of Ukrainian folk music explodes in a punk-rock soundscape. Zrada welcomes you to their party.
A folk-punk tour-de-force, their subversion of Eastern-European musical traditions, enigmatic imagery and raucous live shows are pushing Zrada to craft some of the most forward-thinking and captivating world music in Canada today. With its base in Winnipeg, Zrada has been experimenting with the soundscapes of their ancestral Ukraine for over a decade. Striking vocal harmonies, powerful trumpet and violin melodies combine with jazz infused rhythms to create a wild and joyous dance floor experience. Zrada’s sound originates equal parts in the fog-shrouded valleys of the Carpathians and the sweaty mosh-pits of Anthrax shows; however their music is mysterious and primal in a unique way. Their songs have the ability to transcend language and act as a siren call for those ready to let loose and pick up on the band’s frenetic energy. While Zrada’s music strives to defy the conventional tropes of Ukrainian music from the diaspora, they remain proud of their musical and linguistic heritage. Their 2016 album “Legend” contains a kaleidoscope of folk sounds and styles all the while paying homage to contemporary influences like Gogol Bordello, The Clash and Ukraine’s Haydamaky. Each Zrada song leads the listener farther into a folk-punk universe of melancholy, madness and mystery. “Surf-style guitar, Jew’s Harp and an almost pornographic bass groove.” – Uptown Magazine “Zrada’s album is 16 tracks of harmonious majesty, intricately crafted with raucous rock attitude.” – Stylus Magazine “Balkan and Slavic melodies fused with old-school punk rock energy and set to a raging boil.” – Winnipeg Free Press In 2005, six musicians who loved equally Ukrainian folk music and all things metal, came together to create a unique sonic tableau. Trumpet, accordion and violin led the songs while guitars and booming drums propelled the music forward, often times at break-neck speed. With a variety of lineup changes over the years Zrada has continued to incorporate new styles, such as jazz and Afro-beat into their repertoire. Zrada has become a mainstay in Winnipeg’s diverse music scene and has also performed on a variety of Canadian and American stages. Recent performances include headlining at the Festival du Voyageur, Big Fun Music Festival and a performance at the West End Cultural Centre with Western Canadian Music Award winners The Mariachi Ghost. Zrada is currently recording new music at Collector Studio with plans to digitally release songs steadily throughout the year. Zrada is Andrijko Semaniuk, Adam Ciric, Alex Derlago, Mikhas Chabluk, Nick Luchak and Andriy Michalchyshyn.
Highlights
Art type: Live Music
Music type: Original Music
What this Artist plays most of the time
Genre: FolkOtherPunk
Home base: Winnipeg, MB, Canada
Appeals most (but not limited) to:
Top Venues Performed/Exhibited *
Uketoberfest - Chicago, USA
2018/08
Festival du Voyageur - Winnipeg, Canada
2018/02
Big Fun Festival - Winnipeg, Canada
2018/01
* Unverified
Activity
Events booked with Stagehand
0
Upcoming Events
No upcoming events
See all events
More Photos
Download
Download
Download
Availability