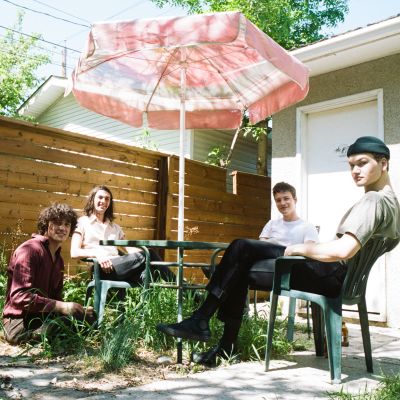 Sign InSign Up
About
Archaics are a 4-piece art-rock band. Experimental tastes create a cavorting atmosphere that accompanies one through thoughts of kaleidoscopic hysteria; a tangible swing from a twisted frame of mind.
Archaics are a four-piece psychedelic art-rock band from Edmonton, Alberta. Their experimental tastes create a cavorting atmosphere that accompanies one through thoughts of kaleidoscopic hysteria; a tangible swing from a twisted frame of mind. Their most recent album, Soft Focus (2016 - Sweety Pie Records) is carefully orchestrated, displaying the chemistry developed over nine years of playing together. Guided by the precise ear of producer/audio engineer Renny Wilson (Mint Records) the album captures a delicate progression in the band’s stylistic expression. Elements of Nigerian Afrobeat, Latin drumming, and the free-roamings of old-time jazz moved the songs away from the safety of the defining sounds of the modern psychedelic-garage revival. Wilson pushed the band to embed intricate subtleties more deeply into each track, allowing swells of innate dynamics to add far reaching dimensions to the album. Experimentation with a diverse array of instrumentation including horns, keys, and clarinet, shine through the movements. Soft Focus premiered online on Slovenia’s Psychedelic Baby Magazine and was reviewed by Sandra Sperounes of the Edmonton Journal, who rated it four out of five stars. Features with Vue Weekly and Beatroute Magazine brought further attention to the album and helped it receive airplay on radio stations across the country. “Archaics [Soft Focus] as a whole come off as scruffier, clangier and more mystical — not to mention more tangential! — than their ’60s predecessors” - Sandra Sperounes - Edmonton Journal July 2016 The past three years have consisted of notable presence and recognition within the Canadian arts community with opening slots for bands such as July Talk, Dan Deacon, The Dandy Warhols, SUUNS, and Dead Meadow. Actively introducing their caravanning circus to curious ears, the band has completed two tours across Canada and performed at festivals including UP+DT, Big Winter Classic, Vancouver Psych Fest, and Golden West Music Fest. Frequent performances in Saskatoon, Calgary, Lethbridge and Vancouver throughout 2016 inspired the booking of an extensive touring schedule throughout Canada in 2017. Filming and recording of the Soft Focus release show was funded by the Edmonton Art Council’s MicroGrant program and allowed for the allure of the evening to be captured. A live video of the song “Nova Swing” from that evening was released in January of 2017. Prior to the release of Soft Focus, Archaics released a split cassette with Montreal psych outfit Pachyderm in June 2016 on both Sweety Pie Records and Montreal label, Brothers & Sisters Records. Other releases from the band include a full length album, Archaics S/T (2014) and a split cassette with Edmonton Neo-folk group, James of Dark Wood (2014). Archaics are currently recording their third full-length album at Edmonton’s Audio Department studio with producers/audio engineers Nik Kozub and Dean Kheroufi. Funding for this album has been provided through the Alberta Foundation for the Arts’ Artist Project Grant program. Following the recording of this album, Archaics will be touring throughout Western Canada and the USA in Spring 2019. Archaics consists of Connor Snell (Vox, Guitar), Josh Beatty (Vox, Guitar), Elijah Browning (Drums), and Peter Masson (Bass)
Highlights
Art type: Live Music
Music type: Original Music
What this Artist plays most of the time
Genre: RockPop
Home base: Edmonton
Appeals most (but not limited) to: Our typical audience consists of people aged 16-40. These are open-minded individuals with a taste for beer.
Top Venues Performed/Exhibited *
Starlite Room
2018/10
The Needle Vinyl Tavern
2017/10
Fortune Sound Club (Vancouver)
2016/10
* Unverified
Activity
Events booked with Stagehand
0
Upcoming Events
No upcoming events
See all events
More Photos
Download
Download
Download
Availability