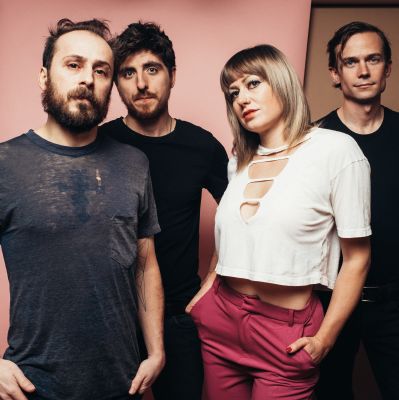 Sign InSign Up
About
Full moon psychedelic grunge. It's rock n' roll for the animals in the forest.
Heavy hitting drums and songs full of emotion, The Sweets take you down the rabbit hole with their blend of indie-pop/sludgy psych-rock. Deep down, somewhere in soft part of your belly, you crave an instant to let your head hang, letting raw velvety vocals and yearning guitar tones take you on a warm fuzzy trip. So when The Sweets bring their show to the stage, you’re lured in by sounds from dreams of wild things but it’s their stage presence that steals your heart. With their inception in 2014, The Sweets have established a steady presence and sonority of their own. They’ve been compared to bands from Fleetwood Mac and Patti Smith to Queens of the Stone Age and Metric. Over the course of their career, they have shared the stage with acts such as The Pack AD, Chad Vangaalen, Counterfeit Jeans and Scenic Route to Alaska and are a familiar sight on many of Calgary’s stages and festivals.The Sweets released their debut EP in 2016 and a summer single in 2017. Currently they are working on new material to record and hone thier sound. Their live show is infectious; a feverish call to the rock n roll animals in the forest. A true group of eclectics, The Sweets will continue to enchant the sweaty masses where ever they go, even if it’s just for the night.
Highlights
Art type: Live Music
Music type: Original Music
What this Artist plays most of the time
Genre: Indie RockAlternativeRock
Home base: Calgary
Appeals most (but not limited) to: teens, 30 +, Adults
Top Venues Performed/Exhibited *
Marquee Beer Market & Stage in Calgary opening for The Menzingers
2017/10
The Edmonton Art and Design Festival
2017/06
Big Winter Classic Festival- Calgary Alberta
2019/01
* Unverified
Activity
Events booked with Stagehand
0
Upcoming Events
No upcoming events
See all events
More Photos
Download
Download
Download
Availability