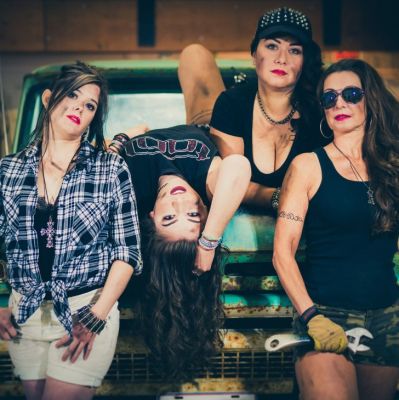 Sign InSign Up
About
Energetic country meets edgy rock when the Dirt Road Angels hit the stage. Dahlia Wakefield, Karen Claypool, Danita Lynn and Shila Marie came together in 2013.
Their brand-new album “Extra Dirty” was released on March 10, 2018 and has been received with much positive feedback. DRA is excited to release the long-awaited title track “Extra Dirty” to Canadian country radio on August 20, 2018 along with the music video where the girls get down in the dirt, bringing a sexy and contagious energy to the song that will make you want to listen over and over again. The angels have released a total of six singles to Canadian Country Radio, along with three music videos and two lyric videos. Their first album, a 15-song compilation CD was released in September 2013, and their second, “Paint the Town Red”, was released September 2014. This upbeat country rock quartet is based in Edmonton, AB and has showcased at CCMA week and performed at many other high-profile events such as Taste of Edmonton, Boots and Hearts Festival, Porkapalooza, Blueberry Bluegrass Music Festival, Beaumont Blues Festival, Festival Place Patio Series and more. They have enjoyed opening for some top country acts including Kira Isabella, High Valley, Doc Walker, Road Hammers, Aaron Pritchett; even U.S. acts Colin Raye, Sammy Kershaw, Aaron Tippin, Blackjack Billy and many more. The Dirt Road Angels are also honoured to have been nominated for ACMA Group of the Year and Fan’s Choice three years in a row! These talented ladies are down to earth and continually strive to entertain their audiences everywhere they go and always come away with new fans.
Highlights
Art type: Live Music
Music type: Original Music
What this Artist plays most of the time
Genre: CountryFolkRock
Home base: Edmonton
Appeals most (but not limited) to: age 25-70
Top Venues Performed/Exhibited *
Beaumont Blues Festival
2017/06
Plamondon Mudbog
2018/07
Cold Lake Rodeo
2018/06
* Unverified
Activity
Events booked with Stagehand
0
Upcoming Events
No upcoming events
See all events
More Photos
Download
Download
Download
Availability